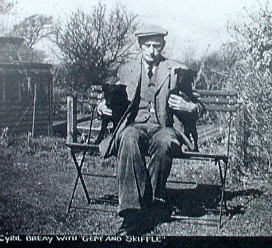 Cyril Breay with Gem and Skiffle

About The Patterdale Terrier Club of America

The Patterdale Terrier Club Of America was established in 1993 for the sole purpose of preserving this unique breed.

At all times, the PTCA strives to retain the Patterdale’s natural instincts and to gain recognition as a viable breed. You can view the breed standards here.

The PTCA currently has members from 43 states and 14 countries. The Patterdale Terrier Club Of America offers one annual event, preferably at a different location, from the previous year. 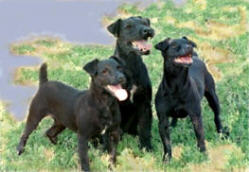 PT0693001 was given to “Rooson Black Satin” as the 1st dog registered with the PTCA.

Satin passed away on January 24th of 2005 at approximately 16 years of age.

She was a rescue from a Wisconsin Interstate wayside during the severely cold winter of 1990. She was suffering from frostbite to her ears and was approaching cars, apparently trying to find some warmth.

She landed with a working terrier family and was forever loved after that. Her deep-throated bark was a signature of hers to the very end.

She was not bred and only garnered a ribbon or two in very small classes. She was tolerant of other dogs and never picked a fight. Some would say that she lived a very uneventful life and just became a loving companion around the house.

However she had an impact on Patterdale Terriers worldwide. 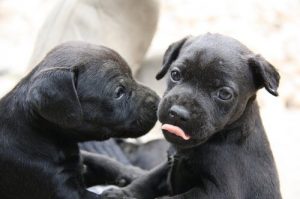 The Patterdale Terrier is a working terrier breed known for its courage and tenacity. Stories abound relating to the willingness of this breed to work endlessly.

They are also gaining recognition as a companion dog by being considerably more laid-back and tractable than some other working terrier breeds.
The bonding traits of Patterdale Terriers give them an overwhelming desire to please, whether working or playing.

In the home, Patterdales are affectionate, gentle and with positive reinforcement, are very well behaved. They bask in the attention of their people.

The Patterdale Terrier is intelligent and sensitive. They learn very quickly with positive reinforcement. They do not do well with a heavy hand.

Your Patterdale will demand a lot of play and exercise, and because he is bred to be a working terrier, he must have a secure, fenced yard to keep him safe.

As a general rule, the PTCA does not recommend any terrier breed for families with children under seven years of age.

Patterdales are very loving to those who are kind and loving in return.

Where Do Patterdale Terriers Come From?

Patterdales have an historical background dating back a hundred years in the Lakes Region of Northern England.
The Patterdale Terrier is a working terrier breed known for its courage and tenacity. Stories abound relating to the willingness of this breed to work endlessly.

They are also gaining recognition as a companion dog by being considerably more laid-back and tractable than some other working terrier breeds.

Do you have a Patterdale Terrier you would like to sell?

You can advertise your Terriers, Puppies, Frozen Semen below by completing the Advertising Form Here.

$25 provides 45 days of advertising. Those looking to re-home a Patterdale Terrier for free can advertise that at no cost

There are no ads matching your search criteria.